In Berlin, during the late 1800’s, a horse named Hans started to demonstrate some amazing mathematical abilities. When asked a variety of computational questions, Hans would respond by stamping his hoof the correct number of times. According to his owner, Wilhelm von Osten, Hans could also tell the time, and successfully tackle more complex calculations (Jackson, 2005).

Initial investigations, by Professor Carl Stumpf, could find no evidence of cheating or trickery. Hans did, indeed, seem to be a very clever horse but not, perhaps, in the way that was first thought!

During 1907, further investigations, led by Professor Oscar Pfungst, reached the conclusion that, rather than being able to count, Hans was responding to the subtle postural and facial cues of his owner and other onlookers. Hans could only correctly answer questions that his questioner also knew the answers to. Additionally, Hans was unable to give a correct response if his questioner was hidden from view (Samhita and Gross, 2013).

What became known as the ‘Clever Hans Phenomenon’ or ‘Clever Hans Effect’ – “where a person or animal can be influenced by subtle and unintentional cueing on the part of a questioner” (Jackson, 2005) – led directly to the development of the “double blind” approach within scientific investigations; where neither the investigator nor the subject knows who is in the test or control groups.

So, what has the ‘Clever Hans Phenomenon’ got to do with you and your Scent Detecting dog? Well, just like Hans, your dog recognises and responds to the subtle (and not so subtle) cues delivered by those around him … including you, his handler!

This effect can be incredibly powerful and can influence your dogs actions in the most profound ways. In an interesting study by Szetei and Miklosi (2003), almost 50% of the study dogs would go to an empty bowl indicated to them by a person pointing to it rather than to a bowl in which the dog had previously seen and smelt food!

In the detection tasks that included the false paper markers the handlers reported that their dogs alerted more at the marked locations than in other parts of the search area. According to Lit and her co-authors, when the handlers believed that there was scent present in the search area (paper markers) they were more inclined to claim that their dogs had indicated on a ‘target scent’; a ‘false positive’ indication. As Lit, et al (2011) state, this would seem to confirm that “handler beliefs affect outcomes of scent detection dog deployments”.

Interestingly, in the same study, when there were no paper markers present, there were more ‘correct’ (no indication) searches. It would seem then that we are as vulnerable to the ‘Clever Hans Effect’ as our dogs; taking cues from our environment and acting on our beliefs about these cues.

It’s worth noting here that, at the time of publication, the Lit, et al (2011) study received considerable criticism. If you’d like to know a little more about this debate, here are two interesting links to follow;

So, how can you help guard against the ‘Clever Hans Effect’ in your own Scent Detecting work?

Practice more ‘Blind Searches’ – Find a training partner, someone who can hide your dog’s target scent for you. If you don’t know where it’s located you’ll be less likely to influence your dog’s searching behaviour. Remember, Hans could only ‘answer’ questions that his questioner could also answer. Your dog will now have to ‘answer’ the scent detecting question for himself.

Keep an OPEN mind – As Lit and her co-authors (2011) demonstrated, even a Blind Search doesn’t prevent you from starting to second-guess where the target scent might (or might not) be located. Something in the search area – for Lit, et al’s (2011) subjects it was a small piece of paper, for you it might be a chair that’s been moved – can cause you to encourage your dog  into, or away from, a certain area. Beware of any internal dialogue that tells you “He wouldn’t have put it there” because, guess what … he HAS put it there! I fell into this trap AGAIN just a few days ago. Believing I knew where the target scent wouldn’t be resulted in me directing my dog away from the correct search area. Ho hum. Time to follow my own advice!

Allow your dog to work independently – I’m a big advocate of ‘Free Searching’. By this I mean letting your dog work away from you, choosing his own route around the search area without close-control and direction from you. Look out for a future Blog focusing specifically on this topic. Giving your dog space to work and, more importantly, resisting the temptation to start searching yourself – looking in boxes, opening cupboards, peering under furniture – helps alleviate any tendency that your dog might have to watch for cues from you rather than search the environment carefully himself. As the saying goes, “Why have a dog and bark yourself”? If you start to show interest in a particular part of the search area it’s highly likely that your dog will too. As soon as this happens, believing that your dog has located the target scent source, you’ll start to look harder yourself. A vicious circle with the almost inevitable result – a false indication from your dog prompted by inadvertent cues from you. 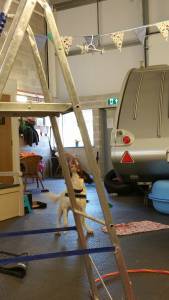 Consider your audience – Like Hans, your dog will respond to cues from any onlookers in the search area. Whenever possible, try to set up searches where your audience is also unaware of the location of the target scent. If they don’t know where it is they’re less able to inadvertently influence your dog’s search. Encouraging your audience to talk to one another can be helpful too. The more attention they’re giving one another during the search the less attention they’ll be paying to your dog. Less helpful is ‘audience silence’ and ‘breath-holding’ as your dog comes close to his target scent.

With “increasing evidence for an acute sensitivity to human gestures and attentional states” in our dogs (Udell, et al 2010), guarding against the Clever Hans Phenomenon can be problematic but an essential consideration in the development of a reliable scent detecting dog.

View all posts by scentdetectfind

12 thoughts on “False Indications, Clever Hans and You”